Shocks were expected at this Barfoot & Thompson New Zealand Open given the quality and depth of the fields, and the biggest on a stunning day of badminton at Eventfinda Stadium was the departure of the women’s second seed and world number eight Saina Nehwal (India), beaten in three sets by complete unknown Zhiyi Wang (China).

It was a match that had the crowd fully engaged with strong support in one of the biggest day two crowds ever seen at the tournament. World number 212 Wang took the first set with relative ease 21-16 and looked in control of the second at 19-15 before Nehwal showed her class to take it to a decider, 23-21.

It was then that she ran out of gas though, with Wang winning the third as she pleased 21-4 to move to a shock spot in the second round and immediately open up one side of the draw.

Top seed in the women’s singles Akane Yamaguchi was made to work hard for her first-round win over Yu Jin Sim (Korea), the diminutive but explosive Japanese player progressed 21-17, 21-19 in a tight tussle that lasted 36 intensive minutes. 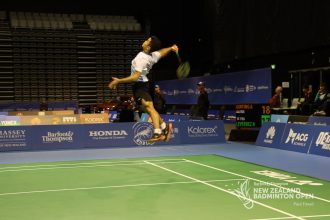 The big guns progressed in the men’s singles, with top seed Anthony Ginting (Indonesia) coming through a tight match against a familiar opponent in Frenchman Brice Leverdez, 21-19, 21-17.

“This was a tough match, a tight match with only a few points, from the first set the gap was only ever two or three points. But at 14 all in the second set Brice made a few mistakes and that was the difference. We know each other so well; we have played three times in recent tournaments, so I knew it was going to be tough.”

Ginting spoke of the importance of a good performance at the Barfoot & Thompson New Zealand Open as the first HSBC BWF Tournament in the Olympic qualifying window. 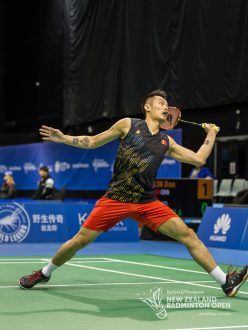 Defending champion Lin Dan (China) delighted the large day two crowd with a performance to suggest he is in form to repeat his win of last year. The seventh seed was too good for a brave but ultimately outclassed Abhinav Manota, the Kiwi did all he could to get in the match, but Dan controlled the tempo throughout to win 21-6, 21-7.

Lin Dan made it clear that Tokyo 2020 looms large in his plans, first to defend his title in Auckland, and then to reach as high a ranking as he can. “This is the first qualifying opportunity for the Olympics, so it is important to be at my best. I will try my best for the Tokyo Olympics, I must reach the highest level I can this year to play in Tokyo. I have very good memories from winning here last year and it was important to me that I return here and play well.”

Manota had his moments and enjoyed great encouragement from the crowd that included his parents, visiting from India and while beaten, he was proud of his efforts post-match.

“I was overwhelmed by the crowd, I didn’t expect that, the crowd was on my side, I want to thank them so much for the support. But on court I was thinking I have to focus on the match and do my own stuff.”

Manota had a slightly less than ideal preparation, playing his doubles early this morning before heading back to work at North Harbour Badminton and then returning to the tournament venue.

“It is a bit crazy but it is almost usual for me now, I normally play in the morning, go to work and train in the afternoon again so it is pretty usual. But a tournament is different, there are so many things you have to prepare for the matches, but I think I did okay.

“That was such a good experience and good moment for my parents, my dad especially. I can tell by his face that the loved it.”

Elsewhere in the men’s singles former world number one Li Hyun Il (Korea) showed he still means business at 39 years of age, with a tough opening round win over Soong Joo Ven (Malaysia), progressing to the second round 21-19, 21-18. There were wins also for Tommy Sugiarto (Indonesia – 2nd seed) and Jonatan Christie (Indonesia – 3rd seed), but it was bad news for number four seed Kenta Nishimoto (Japan), beaten in straight games by Lee Zii Jia (Malaysia).

Earlier in the day young Kiwi’s Alyssa Tagle and Edward Lau progressed to the second round in the mixed doubles, courtesy of a withdrawal mid-match of their opponents, with their Chinese opponents not able to continue due to an injury to Xinwa Guo that also forced him out of the men’s doubles later in the day.

Also through to the second round in the women’s doubles were New Zealanders Jasmine Ng and Justine Villegas, thanks to a 21-17, 21-19 win over fellow Kiwis Rebecca Fong and Stephanie Liao.

Meanwhile in the men’s doubles Riga Oud and Daxxon Vong prevailed in three games in another all Kiwi encounter over Jonathan Curtin and Dylan Soedjasa, ensuing there is plenty for the New Zealanders to celebrate on day three of the tournament.

Play commences tomorrow (Thursday) at 2pm with doors open at 1pm, demand for tickets is already high, thanks to the quality and depth of the fields, highlighted by the Indonesian men, a strong India team across all events, the presence of superstar Lin Dan and the incredible display of women’s doubles on show, with the top ten world ranked combinations all vying for the title.