The opening final set the tone at the Barfoot & Thompson New Zealand Open, with Malaysian second seeds Chan Peng Soon & Goh Liu Ying coming out on top over Praveen Jordan and Melati Oktavianti (Indonesia) (5), in a marathon that took a ninth match point to decide, with the Malaysians winning it at the fourth time of asking, 21-14, 16-21, 29-27. 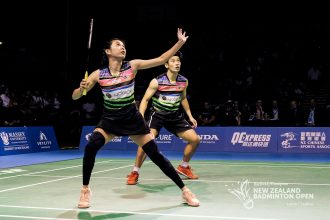