In a tournament full of World and Olympic Champions (11 former world champions and 13 Olympic medalists), there were no shortage of stars on day three of the Barfoot & Thompson New Zealand Open, setting up what promises to be a star-studded night of quarter-finals at Eventfinda Stadium tomorrow night.

Defending champion Lin Dan looks to be in even better form than last year, waltzing through his second round match as he pleased in a 21-12, 21-12 victory over Sai Praneeth B (India), the two-time Olympic champion setting up a mouth-watering clash with tournament top seed Anthony Ginting (Indonesia) after the world number was even more impressive in a 21-6, 21-5 demolition of Chang Wei Feng (China).

That will be the Barfoot & Thompson Match of the Day on Friday evening, with what is expected to be close to a full house in attendance for arguably the greatest match ever played in New Zealand.

3rd seed Jonatan Christie (Indonesia) was amongst the first to book his place in the quarter-finals of the men’s singles, last year’s runner-up was impressive in a tight 3-game win over 2017 runner-up Wang Tzu Wei (Chinese Taipei). Wang held a 4-1 head to head advantage going into the match but couldn’t match the finish of the world number 9, losing 21-16 in the third.

Former world number one Lee Hyun Il (Korea) bowed out of the tournament in what might be his last appearance in New Zealand, the 39-year-old was beaten easily by number 6 seed Ka Long Angus NG (Hong Kong) 21-16, 21-9.

2012 Olympic gold medalist Li Xuerui (China) impressed on her way to the quarter-finals in the women’s singles, defeating Ruselli Hartawan (Indonesia) 21-16, 21-13. Seeded at 6, the current world number 15 looms as a dark horse for the title on Sunday. 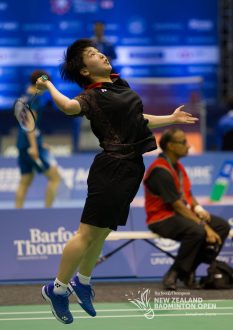 Also looking impressive was top seed Akane Yamaguchi (Japan) who simply dismantled her opponent, defeating Wei Yaxin (China) in straight games, 21-11, 21-16, although she still feels she has plenty of improvement in her.

“Today was not 100% but was better than yesterday, but tomorrow I will be at my best, even better than today.”

Beiwen Zhang (USA) was made to fight for her place in the quarter-finals, the number 3 seed coming through a tough three setter over Chiang Ying Li (Chinese Taipei), and was clearly not happy with her quality of play.

“Today my performance is not what I accept, but I think it was better than yesterday. I am not sure what has happened, I feel like when I rested after Singapore I have had a long holiday and I am struggling to bring my best on court.

“I have changed my game a little, so I am making a few mistakes on court, that is not what I want to see. But I will keep working and look to improve throughout the tournament.”

The women’s doubles is stacked with talent, with the entire world top ten ranked combinations descending on Auckland in search of vital Olympic ranking points, but two of the seeded combinations failed to progress to the quarter-finals.

First to depart were Shiho Tanaka and Koharu Yonemoto (Japan), the number 6 seeds defeated by Kim So Yeong and Kong Hee Yong (Korea) 21-18, 21-15. Next to follow were the 8th seeded Bulgarian Stoeva sisters, Gabriela and Stefani were bundled out in straight games by Du Yue and Li Yinhui (China).

In the mixed doubles, Edward Lau and Alyssa Tagle gave a good account of themselves, the young Kiwis bowing out but pushing the number 2 seeds Chan Peng Soon and Goh Liu Ying (Malaysia) close in a 17-21, 15-21 defeat.

Likewise compatriots Dhanny Oud and Jasmin Ng made the most of their second round experience, the young Kiwis putting up a solid fight in defeat, losing 12-21, 12-21 to number 5 seeds Praveen Jordan & Melati Oktavianti (Indonesia). 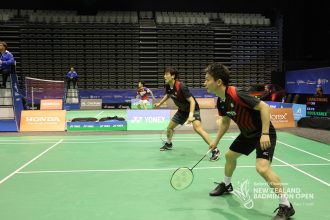 The men’s doubles is always spectacular and so it proved today with top seeds Takeshi Kamura and Keigo Sonoda (Japan) getting plenty of air as they progressed safely to the quarter finals, with a straight sets win over compatriots Akira Koga and Taishi Saito, 21-15, 21-19. They will be joined by two other Japanese combinations, with Takuto Inoue & Yuki Kaneko (4) and Hiroyuki Endo & Yuta Watanabe (3) also progressing.

Three Malaysian combinations have also made it to that same stage in the men’s doubles, setting up an intriguing and no doubt noisy quarter-finals day as fans get in behind their favourite players and show their national pride.

Friday is quarter-finals day at the Eventfinda Stadium, with play getting underway at 5:00pm, with ticket sales still available at the stadium but selling out fast for a night and weekend that promises an exciting conclusion to a Barfoot & Thompson New Zealand Open stacked with superstars of the game.

For the full results from day three, Thursday 2nd May CLICK HERE