On the back of recent rapid growth with numbers doubling at Secondary School level across New Zealand, Badminton received a further boost today with its showpiece event, the New Zealand Open, secure for the next four years thanks to new naming rights partner Barfoot & Thompson.

The Barfoot & Thompson New Zealand Badminton Open will be held at the North Shore Events Centre in early May 2018, confirmed as one of 26 tournaments on the new HSBC BWF World Tour, with players earning ranking points throughout the year towards the year ending finale, the HSBC BWF World Tour Finals.

Managing Director of Barfoot & Thompson, Peter Thompson described a natural decision to step up as naming partner of an event they know well.

“When the opportunity to become the naming rights sponsor of the New Zealand Badminton Open was presented to us, we were very excited about the opportunities this partnership creates for us, for Auckland and for one of New Zealand’s fastest growing sports. 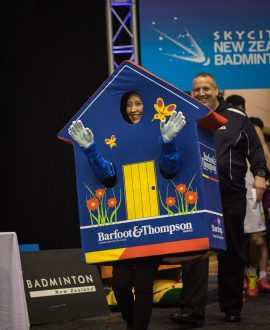 “We have been a proud sponsor of this tournament for three years now and have witnessed the joy that the sport brings to athletes and spectators alike. We look forward to welcoming those spectators to enjoy some fantastic badminton, from world class badminton players from all over the world. Importantly we welcome everyone to our home of Auckland, as the 2018 Barfoot & Thompson Badminton Open showcases our city and country to the world.”

And the world has already noticed, with the introduction of Barfoot &Thompson to the global badminton family not going unnoticed at BWF headquarters.

Welcoming Barfoot & Thompson to the badminton family, BWF President Poul-Erik Høyer said he is pleased to see the increasing diversity of corporate brands which badminton is attracting.

“That is another positive sign as we embark on our new four-year HSBC BWF World Tour of which the Barfoot & Thompson New Zealand Badminton Open is a part.

“Barfoot & Thompson is joining the global badminton community at an exciting and pivotal time in the sport’s evolution, with our events aligned under a distinctive umbrella brand for the first time as BWF seeks to increase badminton’s global presence, broadcast coverage and commercial revenue while also continuing to grow the sport at grassroots level. Badminton has been rising on all levels in recent years and we are poised for even greater achievements in the future.”

Badminton New Zealand CEO Joe Hitchcock says for a sport that receives little central government funding and struggles at times for media exposure, a ‘shop window’ event is vital for the future of the code.

“We are experiencing huge growth in numbers across New Zealand – in the Auckland market especially, this is in part a reflection of the increasing diversity of New Zealand’s population and is being driven by the younger generation as they turn to sports that might not be described as ‘traditional’ for New Zealand.

“Badminton New Zealand is investing in resources, player pathways and high-performance initiatives but what money can’t buy is seeing world class badminton in our own backyard. The aspirational aspect of the Barfoot & Thompson New Zealand Badminton Open cannot be underestimated, the chance for a generation to see their heroes in the flesh and aspire to one day to play on the same courts is just immeasurable for our sport.” 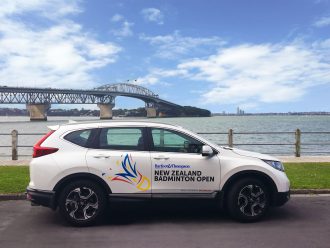 The Barfoot & Thompson New Zealand Badminton Open will be hosted at the North Shore Events Centre from May 1st to 6th and enjoy live television coverage on SKY Sport in New Zealand, coverage that will be delivered around the world by the BWF.

Already with a history of attracting some of the world’s best players, the tournament is expected to enjoy strong fields as a result of inclusion in the new BWF World Tour, but also its proximity to the only Australian event on the calendar, with a number of leading countries and players expected to attend both Super 300 tournaments down under as they look to earn ranking points in the new BWF system.

The HSBC BWF World Tour is a circuit of 26 tournaments attracting the top world ranked players in singles (men’s and women’s) and doubles (men’s, women’s and mixed).

Players on the Tour compete in the 26 tournaments throughout the year gaining ranking points towards qualification in a race to the year ending finale, the HSBC BWF World Tour Finals – the best of the best.

The HSBC BWF World Tour Finals held in December is the ultimate goal for players on the World Tour and only the top eight players in each of the five disciplines of the HSBC Race to Guangzhou Rankings qualify to compete in the season finale.

Barfoot & Thompson knows Auckland best. It is the city’s leading real estate company, selling around one in three Auckland residential homes, significantly ahead of all other competitor brands.