A world-class field of badminton players is expected in Auckland this April as the Barfoot & Thompson New Zealand Badminton Open returns for the eighth year, taking place during the crucial seeding window for the 2020 Tokyo Olympic Games. 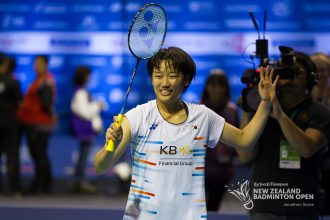 An Se Young will be one to watch at the Tokyo Olympic Games in 2020.

With just 3 months before the first matches at the Tokyo Summer Games, the world’s top players will be looking to take home maximum ranking points from the Auckland tournament and set themselves up for a seeded position in the Olympic draws.

Entries are now open and badminton fans around the country will be eagerly waiting for the release of the entered players on 27 March.

“We have seen a real increase in the quality of players competing in New Zealand over the past few years. Last year we had over 20 players and pairs ranked within the top 10 in the world and with the Olympics fast approaching, we expect another strong field this year.”

”The Barfoot & Thompson New Zealand Badminton Open is one of BWF’s signature events in Oceania and has played a great role in aiding the development of badminton in this region. It is also an integral part of the exciting and lucrative HSBC BWF World Tour,” BWF Secretary General Thomas reflects.