One of the Greatest Matches Ever Played in New Zealand

It was billed as the greatest match ever to be played in New Zealand and it is a match that most certainly lived up to that billing as the two-time Olympic, five-time World Champion and defending Barfoot & Thompson New Zealand Open champion Lin Dan (China) took on the 2019 top seed and world number 7 Anthony Ginting (Indonesia).

The fact such a match was occurring at the quarter-final stage of the HSBC BWF Super 300 is testament to the incredible depth of talent at the tournament, and that the race for Olympic qualifying points is underway in Auckland.

Dan took the first game, but only at the 7th time of asking, squandering 4 game points at 20-16, the Chinese superstar just could not shake Ginting, but eventually smashed away a winner for a 25-23 win with the crowd fully engaged in every hit of the shuttle and point won or lost. 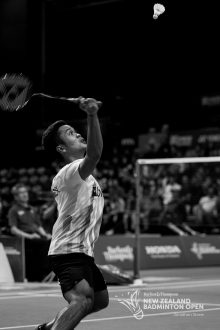 Ginting turned the tables though, easing out to an 11-4 lead in the second game and never looked back as Dan appeared to lose focus and his impeccable range. Suddenly the 2014 Youth Olympic Games champion could do no wrong, taking the second 21-6. If the first game was classic, the second was flat by comparison.

Questions as to whether Dan could flick the switch and refocus were quickly answered as he went out to an 8-2 lead and it was the turn of Ginting to struggle. The Indonesian never gave up though and at one point threatened a comeback

“It was a tough game, we both played well,” said Dan. “When I had my game points if I had won straight away it would not have wasted energy, but I consumed a lot of energy and did not perform well at the end of the first game, so the second game was not great. I was actually not happy about the first game performance and in the second saved my energy for the third game, I think I played well then.

“I came into the game with a bit of a cold, so I must thank my coach and my training partner for their encouragement and support.”

Lin Dan will play Ka Long Angus Ng (Hong Kong) in tomorrow’s semi-finals, after the number six seed won another thriller, taking out Lee Zii Jia (China) 21-19 in the third, the only downer for both players was the fact they happened to finish what was a classic match in its own right alongside the Dan/Ginting match, with the crowd all eyes on what was happening on the court next door.

Jonatan Christie (Indonesia) continues to look impressive this week, backing up from his runner-up finish last year when beaten by Lin Dan in the final, the 3rd seed easily progressed to the semi-finals 21-11, 21-9 over qualifier Sun Feixiang (China).

“Today was like yesterday, a very tough match and I know the young talent that Feixiang is. For me I had to focus my mindset on how to play. I tried to be attacking first and then look around and if he is proving more difficult, I need to bring more than just attack.”

(USA) upset in three games by unheralded Korean Se Young An. The 17-year-old is barely into senior tournaments and with a junior ranking of 18 in the world, there were few indications that she was capable of such a giant killing run into the semi-finals.

An will play the 7th seed Aya Ohori (Japan) after she progressed in yet another three-game thriller over Wang Zhiyi (China), only easing away 21-12 in the final game thanks to her greater experience at this level.

China’s Li Xuerui (6) will play the tournament top seed Akane Yamaguchi (Japan) in the other semi-final after the Chinese player upset the number four seed Sayaka Takahashi (Japan) in straight games 21-10, 21-18. The Chinese world number 15 is yet to drop a game in the tournament, and in fact the 18 points against Takahashi is the most she has conceded in a game.

Yamaguchi will be formidable though, the pocket rocket top seed is also yet to drop a game on her way to the semi’s, one thing is for sure, something has to give tomorrow between these two players. Yamaguchi may have to contend with tiredness though, her quarter final was the final match on court and only concluded in the shadows of midnight on Friday night. 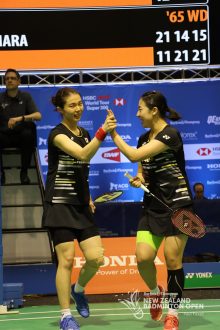 The Japanese women dominate the world rankings in women’s doubles but found a tough foe in Korean pair Kim So Yeong and Kong Hee Yong, with the unseeded Koreans taking out the number three seeds Mayu Matsumoto & Wakana Nagahara in three thrilling games, 11-21, 21-14, 21-15.

“We gave it everything, I am happy for my partner because it encourages her to win the big matches,” said Kong.

Her partner was delighted at the win and their progress to the semi-finals.

“Nowadays all Japanese players dominate but to beat them makes us very happy and shows us we can do this. We always encourage each other no matter what and that helped us win this match, we are over the moon.”

Kim and Kong will play another Japanese pair and it doesn’t get any easier, with the top seeds Fukushima & Hirota their semi-final opponents, after they accounted for Du & Li (China) in straight games today.

The second semi-final will be one for the fans, with Japan playing China in a titanic clash that is sure to have the noise levels high at Eventfinda Stadium. Second seeds Misaki Matsumoto and Ayaka Takahashi (Japan) will face off against Dong & Feng of China.

In the men’s doubles, top seeds Takeshi Kamura & Keigo Sonoda (Japan) survived a scare, coming back to win their quarter-final after dropping the first game to the number eight seeded Malaysian pairing of Aaron Chia & Soh Wooi Yik. They will take on compatriots Hiroyuki Endo & Yuta Watanabe in tomorrow’s semi’s after the number three seeds were comfortable winners 21-6, 21-18 over Ong & Teo (Malaysia) in one of the more one-sided matches of an otherwise tense evening of badminton.

The other semi-final pits Goh V Shem & Tan Wee Kiong (Malaysia) against the second seeds Ahsan & Setiawan (Indonesia). The Malaysian seventh seeds knocked out the fourth seeded Japanese pair Inoue & Kaneko in yet another thrilling three game match that went an incredible 69 minutes and beyond 11pm in real time. The Malaysians had to regroup after wasting six match points to win it in the second but found the reserves to take it out 21-12 in the third.

The Indonesians were pushed just has hard in their quarter-final, winning in three games over the fifth seeded Chinese Taipei pairing of Lee & Wang, taking it out 21-14 in the third.

Second seeds Chan Peng Soon & Goh Liu Ying moved safely into the semi-finals of the mixed doubles, thanks to a solid outing and straight games win over compatriots Tan Kian Meng & Lai Pei Jing, 21-16, 21-11. They are effectively the top seeds in the tournament, following the late withdrawal of the Korean pair who had been giving top billing and will play the number four seeds Hafix Faizal & Gloria Widjaja (Indonesia), who also impressed in a straight games win over Chang and Ng (Hong Kong) in today’s quarter-finals.

Semi-finals day is Saturday May 4, with doors opening at Eventfinda Stadium at midday for a 1pm start to play. Tickets are still available but selling out quickly, purchase online at www.nzbadmintonopen.com or at the door