Kiwi Wildcards Set for the Games of Their Lives

In such a star-studded international field, with multiple Olympic and World Champions on display, with so many of the world’s top ten ranked players and combinations chasing victory, it was always going to be tough for the New Zealanders to shine at next week’s Barfoot & Thompson New Zealand Open, but a select few have the chance to do that thanks to wildcard entries into the main draw.

Headlining the Kiwi effort will be our current national singles champions Abhinav (Mani) Manota and Sally Fu, with both set to play first round matches on Wednesday to open what promises to be the highest quality badminton tournament this country has ever hosted. 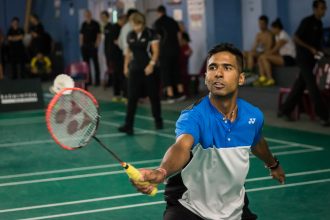 The opportunity for Manota has taken on even greater significance with news that the 27 year old will play two-time Olympic and five-time World Champion Lin Dan (China), with the defending champion an absolute legend of the sport. Manota is having to pinch himself a little to make sure this is all real.

“I used to watch Lin Dan play when I was younger, and I looked up to him. I always wanted to play like him and emulate his style, but I have to admit I never thought I would have this opportunity to play against him.  I am excited about the prospect of having the chance though, and even better to play him in my own country is an amazing experience.”

Manota says the timing is perfect, with family and friends there to share the big occasion.

“It already means a lot to me but will be made all the more special knowing that my parents will be in the stands seeing me play. They will be here from India on holiday, so its perfect timing. Also having my friends in the stands cheering for me will give me more motivation.

It’s an honour to get a wildcard entry in such a high-level tournament against top players. Given it is inside Olympic year for qualifying, it’s really hard to get into these top-level tournaments as there are lots of players out there with the same goal of qualifying for Tokyo. It is a big responsibility as there is an expectation for me to do well as I’m one of the few Kiwis in the tournament. But since I’m playing the defending champ I have nothing to lose, but so much to gain.”

While Manota will have his hands full playing the legendary Lin Dan, Sally Fu is also relishing the prospect of a main draw appearance at a BWF Super 300 level tournament, something that simply would not be possible without the benefit of a home draw wildcard.

“This is a very rare chance for me to play at this level, we usually need to travel to compete at this level and also it is quite difficult to qualify at big events.”

“But regardless of who I am playing I will clearly be the underdog and up against a much higher ranked opponent. I’m happy to be able to represent New Zealand at this event and I’m also really nervous because I want to make New Zealand proud and perform the best I can.”

Currently we don’t have any players that can enter this level of tournament and get in the main draw – especially not in an Olympic year, so that is a huge experience the five players and pairs get in and I’m sure all of them think it’s a big honour and challenge they have in front of them.

“On the other hand, I know they’re excited and looking forward to get on court. Take Mani for instance, he will meet Lin Dan in the first round and that would be a dream for most young players to actually play him.”

Olsen-Siegemund says the quality of players attracted to the Barfoot & Thompson New Zealand Open is a wonderful chance for the local badminton community to gauge where we sit against the best in the world.

“I personally think that it’s getting more and more important over the next few years, that we here in New Zealand can show badminton at its highest level. We’re still in a phase where we are building our system from Under 15s to the NZ National Squad and we try to inspire, teach and challenge our players to become High Performance athletes in all aspects.

“While this process takes time, we’re definitely moving the right direction. I don’t necessarily think the most important aspect is that our players can play in front of family and friends, but I think the fact that we can expose our players to such a world-class experience on home soil and they have to perform in front of many spectators makes it such a valuable learning experience they can use on their way to fulfil their dreams.”

The tournament is underway with qualifying starting on Tuesday and most main draw action getting underway on Wednesday, with all matches played at Eventfinda Stadium on the North Shore.

Tournament Director Sam Paterson says fans are in for a treat but should not leave their ticket purchase until too late, with demand at an all-time high.

“I have no doubt we will achieve sell-out status for the later days of the tournament. Fans are guaranteed to see world-class badminton throughout, right from the first round with the Kiwis in action to the finals on Sunday when the titles and ranking points will be on the line.

“We promise to put on a great show and for those who have not been to the Eventfinda Stadium (formerly North Shore Events Centre), you will be delighted at the recent refurbishment work that has been undertaken, in a stadium that is already renowned for its incredible atmosphere for big sporting events.”

New Zealanders to receive wildcards into the first round of the main draw are: