New Zealand’s best badminton players will take on the world at the Barfoot & Thompson New Zealand Badminton Open played at the North Shore Events Centre this week (from May 1st to 6th), but such is the quality of the tournament that most will have to fight their way through qualifying to reach the main draw.

The BWF Super 300 tournament is the showpiece event for the sport in New Zealand, attracting many of the world’s leading players, headlined by Chinese superstar and current world number 7 Lin Dan, the two time Olympic Games gold medalist is the top seed in the men’s singles.

Such is the quality of international entries that Abhinav (Mani) Manota (North Harbour) and Sally Fu (Auckland) are the only Kiwis automatically in the main draw of the singles, receiving wildcards into the men’s and women’s singles respectively, leaving others to play through qualifying, or to play in main draw doubles or mixed doubles.

“I am really excited and looking forward to it, especially with the wildcard putting me in the main draw. This is a huge opportunity for me, especially playing an Indian opponent who is high up in the rankings, that is cool for me.

“This is a high-level tournament, with Lin Dan coming here especially. I am excited and looking forward to being on court.” 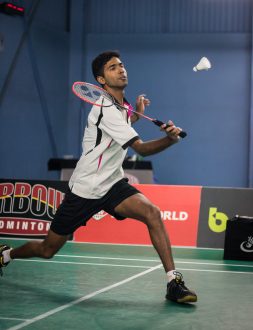 Called ‘Mani’ by all who know him, Manota arrived in New Zealand in 2014, having left home in India to study for one year in Christchurch. He had no plans to play at a high level but was encouraged by fellow Harbour player Dylan Soedjasa to move to Auckland to get more exposure and play some of the bigger national tournaments. Manota’s status now allows him to fly the New Zealand flag at BWF events, but he has hopes of one day wearing the silver fern on an even bigger stage.

“I want one day to play for New Zealand at the Olympic Games, I have some hoops to jump through in terms of my paperwork and gaining a New Zealand passport, but my dream is to play at the Tokyo Olympics and the 2022 Commonwealth Games.” As well as that wildcard into the men’s singles, Manota will play with Justine Villegas (North Harbour) in the mixed doubles.

North Harbour is not only the local and supporting Association but has the greatest representation with a dozen players taking to the courts at the North Shore Events Centre. Badminton North Harbour CEO Glenn Cox is delighted to once again be supporting the event and having such a showcase for the sport played in his own backyard.

Cox is proud of the representation in the tournament from his Association and says that is the result of much hard work by many people.

“We have seen strong results as an Association with many of our players ranked in the top New Zealand positions and our teams performing exceptionally well, the programme is in a pretty good place. Hopefully the players coming through and in the Barfoot & Thompson New Zealand Open reflects the pathways we are providing to help them reach the highest level, it is rewarding to see the number of Harbour players on display this week.

“We are just proud to do our bit, to be the official training venue for the tournament, that again gives our players and coaches the chance to see the international talent up close and in person. But I know I speak on behalf of everyone when I say we are delighted to do all we can to support Julie (Carrel – Tournament Director) and Badminton New Zealand in the hosting of this tournament.”

Tickets and information at www.nzbadmintonopen.com