Two-time Olympic Games gold medalist Lin appeared to toy with his opponent at times as he used all his 18 years’ experience and court craft to move Sameer Verma (IND) around the court to win 21-19, 21-9, setting up a semifinal against Korea’s Heo Kwang Hee. 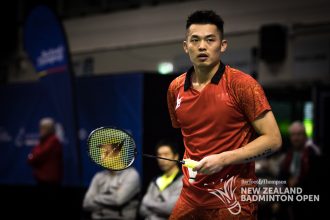 The number five seeded Indian led 18-15 in the first game, but had no answer as Lin flicked the switch, taking out the first 21-19 and then steamrolling his way through the second 21-9.

Heo continued his giant killing run, the qualifier won with ease against eighth seed Kantaphon Wangcharoen (THA), 21-7, 21-16. The 22-year-old is playing well above his world ranking of 127, with nothing to lose now against the tournament favourite.

One of the most impressive performances early on quarterfinals night came from Sai Praneeth (IND), the third seed was a class above Sri Lanka’s Niluka Karunaratne in a one sided 21-7, 21-9 romp in the men’s singles, booking a semifinal against second seed Jonatan Christie (INA).

“Speaking frankly, I think this is a match I should win convincingly, from the start my strokes were going good and that leads to confidence,” said Praneeth. “The game is all about confidence because everyone is playing at such a good level.”

Jonatan Christie (INA) won his match against countryman and sixth seed Tommy Sugiarto and will now face Praneeth, but the win was not in the fashion he would have enjoyed. Sugiarto withdrew midway through the second game, having won the first 21-17, suffering from double vision. After trying on multiple occasions to continue, the former world number three reluctantly had to shake hands and seek further treatment.

First, second, third and fifth seeded pairings all qualified for the semifinals of the mixed doubles competition, setting up two enthralling matches on Saturday afternoon.

Second seeds He Jiting and Du Yue (CHN) were comfortable winners in the first match of the night at the North Shore Events Centre, easily dispatching Go and Pham (VIE) in the mixed doubles, in the process booking a spot against Chinese Taipei combination Wang and Lee in tomorrow’s semifinals.

“Today we were very focused, and the opponents were a bit weaker today, but we played well, we are pleased with the way we were able to play,” said He. “We are very confident for the semifinals.” 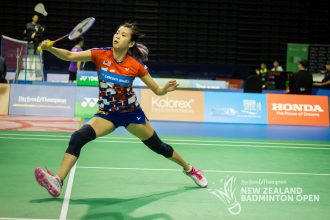 The 20-year old pairing will have to maintain that level of intensity against the Chinese Taipei pairing, the 3rd seeds were made to fight but came through in a three-game classic against Chan and Goh from Malaysia. The first two games were split 21-16, 16-21 before the higher ranked pairing of Wang and Lee edged the third, 24-22 in a match that had the crowd engaged throughout.

“That was a very hard game, we have not won against them before so that was exciting, we are very happy to have won such a close game,” said Wang.

Top seeds Puavaranukroh and Taerattanachai (THA) were too strong for the unseeded Indonesians Ronald and Saufika and will play the number five seeds from Korea, Seo and Chae, after they progressed in straight games over Ou and Cao (CHN).

The women’s singles semifinals will feature one all China clash and one all Japan clash as the race for the final heats up.

The Barfoot & Thompson match of the day lived up to its billing, in a repeat of the BWF 2017 World Junior Championship, Gregoria Tunjung (INA) took on Han Yue (CHN). On that occasion it was Tunjung with the victory but tonight Yue turned the tables in an enthralling win over two tight games, 21-19, 21-16.

Yue explained a different approach on this occasion. 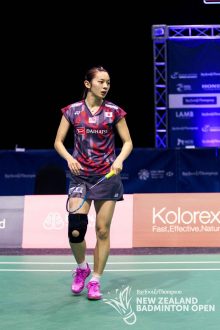 “From the last time we played, this time I was much more aggressive and went for my shots, this was the difference today. I will take so much confidence from the win, but I must also be aggressive in my next match against Yiman if I am to have a chance of winning.”

Zhang Yiman (CHN) will play her countrywoman Yue in the semifinals after she backed up her impressive win over the third seed Fitriani (INA) in the second round with an easy win over Chananchida Jucharoen (THA).

Meanwhile fourth seed Minatsu Mitani (JPN) was an impressive winner against her countrywoman and seventh seed Haruko Suzuki, progressing to the semifinals thanks to a comfortable 21-17, 21-11 victory.

Equally as dominant was the top seed Sayaka Takahashi (JPN), in a 21-10, 21-11 win over Pattaruda Chaiwan (THA). The world number 19 has not looked like dropping a game in the tournament and will be a warm favourite in the semifinals.

One of the biggest upsets of the night came from the Japanese pairing of Sakuramoto and Takahata who defeated the number one seeds Haris and Pradipta (INA) in a three-game marathon, 21-8, 15-21, 21-15 in a match lasting 72 minutes.

“We have nothing to lose at this point in a tournament, we are just trying to play our best and make it through to the final, that is all we did tonight, played to our normal strengths and it was enough for the victory,” said Takahata.

The win set up an all Japan clash in the semifinals, with Higashino and Nakanishi winning in straight games over Baek and Lee (KOR).

In the all Korean quarter final, it was Kim Hye Rin and Kong Hee Yong who proved too strong and booked a place in the semi’s, winning a close clash 21-18, 21-19 over Chae and Kim.

They will play the surprise packets in the semi, with Chinese pair Cao and Yu upsetting the second seeded Japanese combination of Fukuman and Yonao in straight games.

Bodin Isara and Nipitphon Phuangaphuapet (THA) maintained their title challenge in the men’s doubles, the fourth seeds defeating Attri and Reddy (INA) in straight games to set up a clash with the second seeded Indonesians Angriawan and Hardianto.

The Indonesians came through a late-night thriller, winning in three gripping games over Chan and Chen (MAS), with the match ending just before 11pm.

The top seeds will be hard to roll in their current form however, with Wang and Chen (TPE) doing all they had to do with a degree of comfort in a straight games win over Chai and Wang (CHN).

Next up they play He and Tan (CHN) who came through another late late show, defeating Apisuk and Viriyangkura (THA) in three close games in a match that went beyond the hour mark to book a spot in the semifinals.

The semifinals get underway at 1pm at the North Shore Events Centre, with doors open at midday with ticket sales at the door or online