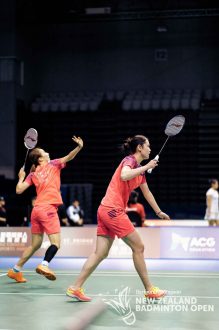 Cao Tong Wei and Yu Zheng won their way through to the women’s doubles final, in a marathon three game encounter with Kim and Kong (KOR) that took 83 minutes to decide.

The Koreans took the first game 21-15, but a change in approach from the Chinese pair turned the match, as Yu described.

“At the beginning we lost the first set but changed our mentality and strategy, winning the second game and by the third game they had a handle on that change in strategy. But then it came down to mentality and the desire to fight, that helped us win the game.

“We are confident now for the final, we are well prepared for tomorrow and will bring our best.”

That approach clearly frustrated the Koreans, with numerous instances of time wasting and delaying leading to a yellow card for Kim midway through the second game, as they tried to halt the change in momentum to no avail.

Young Chinese Taipei combination Wang Chi-Lin and Lee Chia Hsin progressed to the finals emerging from a hard-fought match against He and Du (CHN) (2), the third seeds overcoming the loss of the first game to close out an even match 21-18 in the third.

Wang believes the tactics of the Chinese might have played into their hands today.

“The opponents played quite short today and initially didn’t rush the net, but after a while they started attacking the net and attacking Lee a lot more, and this led to our victory today I believe.

“I have to be careful not to be too confident on the court, I must keep calm not too hyped up, that is when I can make some mistakes, but we are feeling good about the final tomorrow for sure.”