MANI WINS HEARTS BUT BOWS OUT OF NZ OPEN

Abhinav (Mani) Manota (NZL) bowed out of the Barfoot & Thompson New Zealand Badminton Open today, losing in straight games to Niluka Karunaratne (SRI), after the North Harbour player had thrilled the crowd with his stunning first round upset last night.

The quietly spoken Manota offered no excuses, paying tribute to his opponent while also espousing the virtues of the tournament. 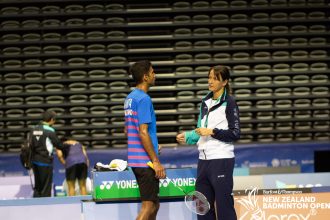 “It was just him, he played better than me today and I couldn’t keep up with the pace, I think it was just a bad day for me.  When I was up by three points in the second set he came back, I missed a few shuttles which was unnecessary – I should have kept the shuttles going. Overall, I am happy with my performance, but it just wasn’t my day today.”

“It was a great experience for me, especially last night playing and winning against the former Indian number one, that was a good achievement for me. I will definitely come back stronger, play more of these tournaments and hopefully get better and better.”

New Zealand’s involvement in the tournament is not yet over however, with Oscar Guo and Dacmen Vong playing a second round men’s doubles match at 5:30pm at the North Shore Events Centre.