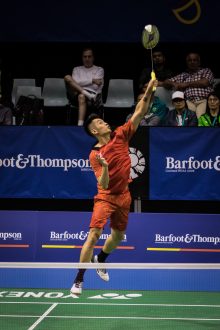 The New Zealanders bowed out on day three of the Barfoot & Thompson New Zealand Badminton Open as the stars took control heading into Friday’s quarterfinals, setting up some fascinating matches on quarterfinal Friday, starting at 5pm at the North Shore Events Centre.

The young Indian prospect took the opening game, but in the process woke the giant, with Lin finding his range to power to the win 21-12 in the third.

“My opponent played very well today, he was 18 years younger than me, so today I wanted to prove I can beat the next generation of younger players. Today I showed that I have the determination to fight and win,” said Lin.

“I did have the lead in the first game, but he went on to win. For me it was changing my mentality in the second and third games in order to succeed in what was a tough match.”

Abhinav Manota (NZL) bowed out of the men’s singles, losing in straight games to Niluka Karunaratne (SRI), after the North Harbour player had thrilled the crowd with his stunning first round upset.

The quietly spoken Manota offered no excuses, paying tribute to his opponent while also espousing the virtues of the tournament.

“It was just him, he played better than me today and I couldn’t keep up with the pace, I think it was just a bad day for me.  When I was up by three points in the second set he came back, I missed a few shuttles which was unnecessary – I should have kept the shuttles going. Overall, I am happy with my performance, but it just wasn’t my day today.”

“It was a great experience for me, especially last night playing and winning against the former Indian number one, that was a good achievement for me. I will definitely come back stronger, play more of these tournaments and hopefully get better and better.” 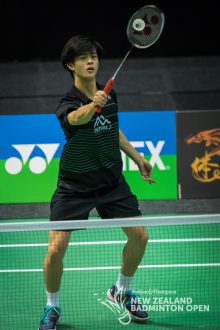 It was a similar story for the young men’s doubles pairing of Oscar Guo and Dacmen Vong, as there were defeated in straight games by Isara and Phuangphuapet (THA), the fourth seeds winning 21-12, 21-15, with the Kiwis giving a great account of themselves against their world class opponents.

17-year-old Guo was clearly disappointed to lose the match but took plenty from the week.

“I was pleased with how we played and managed to impose our game into the rallies and give them a good fight. We need to go away and work on our strength and finishing rallies, but we have many years to keep coming back to play at this tournament.”

18-year-old Vong was also content with their performance, albeit disappointed to bow out.

“I am also pleased, we are treating this as a learning experience, playing in such a big tournament, so yeah, we are pleased. We have to work harder on our serve and receive, that is important, especially in doubles.”

Meanwhile a familiar face advanced to the quarterfinals in the men’s singles, former world number 3 Tommy Sugiarto (INA) defeated countryman Panji Maulana in straight games at a tournament and city he enjoys returning to.

“I always enjoy the NZ Open, the tournament, the city, the weather – it is all very nice. My form in the first two rounds is good, but tomorrow I must focus and concentrate, the quarterfinal will be a much tougher opponent, I will have to play well. The New Zealand Open has many top players here, it is a strong event.” 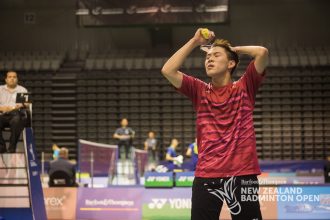 It wasn’t such a good day for defending champion Lee Cheuk Yiu (HKG), the unseeded world number 38 was beaten in a thriller by 5th seed Sameer Verma (IND), 21-17, 21-19 to end any hopes of a repeat giant killing run to the title.

The day did not go well either for Thailand’s Mattana Hemrachatanun, with an ankle injury preventing her from taking to the court in a match against countrywoman Pattarasuda Chaiwan in the women’s singles, allowing the easiest of pathways through to the third round for Chaiwan.

It has otherwise been smooth sailing for higher ranked players and combinations, with young Kiwis Roanne Apalisok and Ashley Tan no match for the second seeds Naoko Fukuman and Kurumi Yonao (JPN) in the women’s doubles. Fellow Kiwis Danny Oud and Jasmine Ng also went down in straight games in their mixed doubles round two clash with Vietnam combination Do and Pham.

Likewise, it was relatively straight forward for the seeded combinations in the mixed doubles, in a tournament that looks hard to pick. Number one seeds Puavaranukroh and Taerattanachai (THA) dispatched Kappor and Garg (IND) in straight games. They were joined by second seeds He and Du (CHN) and third seeds Wang and Lee (TPE) as the best talent starts to get to work at the business end of the tournament.

The Japanese women enjoyed a successful day, always a powerhouse in the sport, they were led by women’s singles seeds Takahashi (1), Mitani (4), Suzuki (7) in progressing to the quarterfinals without dropping a set. They are just as dominant in women’s doubles with three combinations through to the quarterfinals, with another still to play in the night session.

Quarterfinals get underway at the North Shore Events Centre on Friday at 5pm with doors open at 4pm.