Lin Dan (CHN) put on his best showing of the week in a total dismantling of qualifier Heo Kwang Hee (KOR) in today’s semifinals of the Barfoot & Thompson New Zealand Badminton Open.

A capacity crowd loved every minute of the 21-16, 21-16 match, although perhaps no moment more so than when Dan decided to halt proceedings early in the second game to change shirts.

It was a clinic though from an absolute master, and as hard as Heo tried, he was never really in the match in a tournament where he has played brilliantly and overachieved in making the semifinals.

It was however a very brief appearance with media post-game, as the 34-year-old preferred a quick departure to recover and then prepare for tomorrow’s final against second seed Jonatan Christie (INA).

20-year-old Christie was a hugely impressive winner over Sai Praneeth (IND) in the earlier semifinal, the number two seed lifting himself up off the canvas to eventually win with ease over a tiring third seed.

Praneeth took the first game 21-14 and led early in the second before Christie found his groove and upped the pace to claim the second 21-19 and the third in a canter 21-8 as he clearly sped up play to wear down his tiring opponent.

“Number one is physical, number two is strategy and knowing how to manage the match situation. He is a good player and very tough, the first game was not so easy for him and I knew that in the second and third games I must be stronger.

“I played in Asia last week and lost in the second round, so I am very excited for this tournament and now tomorrow int eh final I must be more than prepared. I want to thank my god Jesus and the fans. In New Zealand it is like playing at home, many many Indonesians are here to support me.”

Zhang Yiman overcame her countrywoman Han Yue in the all Chinese women’s singles semifinal, ending the run of the 2017 BWF World Junior Championship runner-up in straight games, 21-19, 21-15, in 40 minutes.

The 21-year-old admitted to some nerves when playing another Chinese player but was delighted to progress to the final. 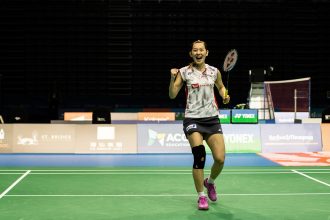 “It was difficult as it becomes a battle of the heart and the mind in such a game, especially when you know the other player so well. But I never gave up, no matter what the situation, that is my strength, to never give up.

Meanwhile number one seed Sayaka Takahashi (JPN) took a while to kick into gear, but when she did her game was too strong for number four seed and compatriot Minatsu Mitani.

“I was prepared to play a really long game today so from the start and I was pleased to finish very strongly. After losing the first game, in my mind I was in trouble, but I changed those thoughts to think only of winning. I was being careful to aim for the right shots at the right time and waiting for my opponent to be out of position.”

Takahashi does not know a great deal about her finals opponent tomorrow.

“I have never played against Yiman, but I must look to keep the rallies long and make sure my shots go in consistently.”

Cao Tong Wei and Yu Zheng (CHN) won their way through to the women’s doubles final, in a marathon three game encounter with Kim and Kong (KOR) that took 83 minutes to decide.

The Koreans took the first game 21-15, but a change in approach from the Chinese pair turned the match, as Yu described.

“At the beginning we lost the first set but changed our mentality and strategy, winning the second game and by the third game they had a handle on that change in strategy. But then it came down to mentality and the desire to fight, that helped us win the game.

“We are confident now for the final, we are well prepared for tomorrow and will bring our best.” 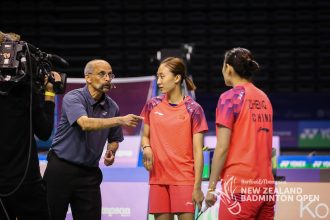 That approach clearly frustrated the Koreans, with numerous instances of time wasting and delaying leading to a yellow card for Kim midway through the second game, as they tried to halt the change in momentum to no avail.

“We prepared for a long match, so we were surprised that it was so short, but we are nevertheless it was still a hard match,” said Sakuramoto. 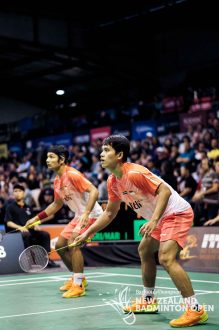 The Indonesians have set up a potential classic in the final, with top seeds Chen Hung Ling and Wang Chi-Lin (TPE) just as impressive in a straight games win over He and Tan (CHN). The young Chinese Taipei combination has looked supreme all week and did not let up today, taking the match 21-14, 21-13 in 36 minutes, doing so while hardly breaking sweat.

Young Chinese Taipei combination Wang Chi-Lin and Lee Chia Hsin progressed to the finals emerging from a hard-fought match against He and Du (CHN) (2), the third seeds overcoming the loss of the first game to close out an even match 21-18 in the third.

Wang is being careful not to get too ahead of himself going into tomorrow’s final.

“I have to be careful not to be too confident on the court, I must keep calm not too hyped up, that is when I can make some mistakes, but we are feeling good about the final tomorrow for sure.”

Their opponents were put through the ringer as well, with Chae and Seo (KOR) upsetting the top seeds from Thailand to make their way into tomorrow’s final. In a game that had many twists and turns, it was the Koreans who emerged winners, 21-17 in the third.

Schedule of Play – all games at North Shore Events Centre