The match the tournament has been waiting for ever since his entry was confirmed did not disappoint, with Lin Dan (CHN) thrilling a huge second day crowd at the Barfoot & Thompson New Zealand Badminton Open as he disposed of Takuma Ueda (JPN) in straight games, but he was almost put in the shadow by a wonderful win for rising Kiwi Abhinav Manota.

The two-time Olympic Champion’s pulling power was on full display, with one of the largest day-two crowds ever seen at the BWF Super 300 event, and he didn’t let the largely pro-Chinese audience down in an all-court display, winning 21-13, 21-12.

“I have been playing around the world for 18 years and have never been to New Zealand, I had to come here this year for this tournament, New Zealand is beautiful, I have always wanted to visit here,” said Lin.

Lin is used to a great deal of attention, with 16 million followers on Weibo alone, and enjoyed the large and vocal support at the Events Centre tonight is feeling confident about the rest of the tournament.

“I love the crowd like this with all the support. I will go back to the hotel now and talk with my coach about the next match, but I feel like I am playing well.”

The Kiwis contributed to the day’s highlights too, with great wins for Abhinav (Mani) Manota in the men’s singles and victory for young men’s doubles pair of Oscar Guo and Dacmen Vong, as the Kiwi pair easily accounted for Cham Chen and Toby Wong (AUS), 21-9, 21-12.

Guo was pleased with their efforts and already thinking of the next round. 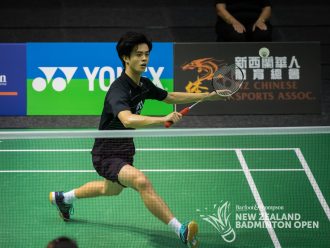 “That went real smooth, we got on top of the serve and receive and played our attacking shots well and kept calm, so yeah I thought we played well. We will research when we know our opponents and look for any weaknesses, but we will enjoy it for sure.”

Vong enjoyed the chance to play in front of a packed North Shore Events Centre crowd.

In the final match of the night, in the Barfoot & Thompson Match of the Day, national champion Abhinav Manota put up an amazing show against India’s Sourabh Verma. Manota went toe to toe with his much higher ranked opponent, keeping the crowd in full voice right to the final point and well after 10pm.

The 26-year-old former Indian national but now proud Kiwi, rattled off 5 consecutive points in the final game to take the match 21-19, 14-21, 21-19 against the former Indian number one.

“It feels really, really good, especially playing at this time of the night and against India’s former number one, that is a good achievement for me. He came back in that second set really well but I managed to come back again in the third set.

“I want to thank the crowd, the support means so much to me and I appreciate it, I clearly felt that benefited me and I was able to put him under pressure thanks to that support.”

While the men’s singles was all about Lin Dan’s first appearance in the night session and Manota’s stunning win, defending champion Lee Chiuk Yiu (HKG) safely proceeded to the second round earlier in the day, defeating Milan Ludik (CZE), 21-10, 21-18.

“Today was good, here it is my lucky place being the champion last year, but this year will be harder with Lin Dan such a high-level player being here, I will have to fight hard this year and remember the good memories from last year,” said Lee.

The youthful Kiwis otherwise struggled to foot it with their higher ranked opponents in a tournament that boasts 40 players or combinations ranked in the top 50 in the world. 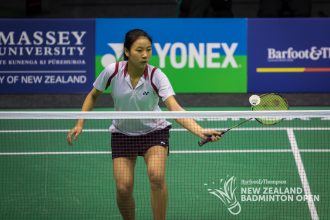 While the result may not have gone her way, the experience was still an amazing one for 14-year-old Shaunna Li. The current national U15 singles, doubles and mixed champion was defeated 21-12, 21-9 by number 7 seed of Haruko Suzuki Japan in the first round of the women’s singles, the experience alone was worth its weight in gold for the Rangitoto High School student.

The only other New Zealander in the women’s singles also bowed out today, with wildcard Sally Fu (Auckland) defeated 21-15, 21-11 by Zhang Yiman of China.

One of the upsets of the day came in the women’s singles, with second seed Lee Chia Hsin (TPE) bundled out by 2017 World Junior Championship runner up Han Yue (CHN).  Yue was in control throughout in a surprisingly one-sided affair, winning through to the second round 21-11, 21-11, and putting the rest of the field on alert to a possible giant killing run.

In women’s doubles Erina Calder-Hawkins and Jasmin Ng (NZL) gave a good account of themselves in a 21-17, 21-14 defeat at the hands of Meghana Akkampudi and Poorvisha Ram (IND).

Another Kiwi teenage pair in Tamara Otene and Jacqueline Yu were easily beaten 21-4, 21-5 by Arisa Higashino and Kie Nakanishi (JPN) but again will be all the better for the experience.  It was a similar story for Caragh Alley and Ella Smith (NZL), beaten in straight games by Koreans Baek Ha Na and Lee Yu Rim.

The battle of the heavyweights in the men’s doubles today went the way of the third seeds Kittinupong Kedren and Dechapol Puavaranuikroh (THA), but the pair were made to fight all the way by unseeded scratch pairing of Boon Heong Tan (MAS) and Yoo Yeon Seong (KOR), winning through 17-21, 21-9, 21-14.

Day three action gets underway at the North Shore Events Centre on Thursday, starting at 2pm, with another bumper crowd expected to witness more world class badminton. The highlight will likely again be Lin Dan in his second-round match against Lakshya Sen (IND), with that match scheduled for a 6pm start.